Makiguchi saw the law or principle (Dharma) elucidated in Buddhism not as overriding or supplanting the laws of the social and physical sciences. Rather, he considered the causality described by Buddhism to be of a more expansive and enduring order that included and extended the cause and effect relations pertaining in other realms.

If, however, there is some difference between them, it is that the societal laws of causality treated by ethics and morals--[the search for] a reasoned and humane way of life--are limited only to this lifetime. Likewise, the laws of causality treated by science are limited to the phenomena of their respective disciplines. Even the synthetic science that is philosophy has a view of life and an understanding of the world limited to this lifetime. In contrast, Buddhism clarifies ... the causal laws governing the processes of ceaseless change and transformation that span not only the secular, but the supra-secular realm embracing past, present and future. [1931]1

The impetus to explain the world in terms of universal laws and principles is consistent throughout Makiguchi's life and across pursuits in such diverse fields as geography, education and religion. In part he was motivated by the desire to enable people to live free from the arbitrary dictates of specific individuals wielding political or social authority. He saw the shift away from the authority of individual persons toward principles equally accessible to all as part of a larger historical trend. Commenting on the injunction in the Nirvana Sutra to "rely on the Law, not on the person," he writes that it "is consistent with the underlying intent of the constitutional form of political dispensation that has been universally adopted by civilized nations in the twentieth century as well as with the outlook of science." 2 He further asserted that, in a constitutional system, even the monarch is subject to and must respect the laws of the land. 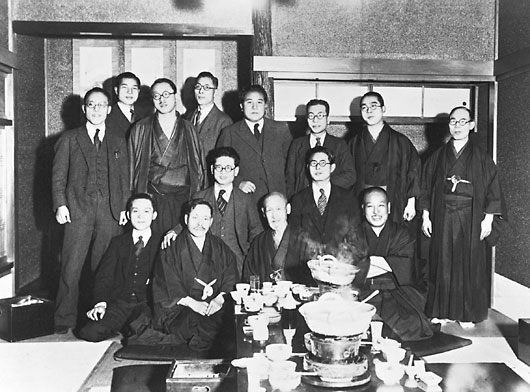 At a Soka Kyoiku Gakkai gathering (front row, 2nd from left) with Toda (back row, 3rd from left)

At the time Makiguchi wrote this, in 1931, it was consistent with the generally accepted interpretation of the constitution, which viewed the Japanese emperor as a functional organ of the state, embodying and representing the nation's sovereignty, but not exercising actual political decision-making authority. By the mid-1930s, however, militarist forces in Japan would have gained ascendancy. For these forces, the idea of constitutional monarchy was abhorrent. They sought to elevate the status of the emperor to that of a divinity, a living god beyond any control or questioning. And since the constitution defined the armed forces as reporting directly to the emperor, any enhancement of the emperor's authority could easily be translated into expanded political influence and control for the militarist faction.

Throughout this period, Makiguchi continued to express his faith in people's ability to think and reason for themselves--a fundamentally democratic outlook that was becoming increasingly marginalized as Japan came under the control of militarist fascism. Efforts to control people's thoughts and beliefs grew more stringent and eventually Makiguchi himself would come under surveillance by Japan's Special Higher Police who were charged with suppression of "thought crimes."

Given his nature as a person concerned above all with engagement with people and society, it is not surprising that as soon as Makiguchi committed himself to faith in Nichiren Buddhism, and in light of his own enthusiastic appreciation of the experience, he began sharing his faith with others. First among these was his young protégé, Jogai (Josei) Toda, who formally adopted Nichiren Buddhism in Makiguchi's footsteps and at the latter's urging. Makiguchi encouraged others to take faith in Nichiren Buddhism. In doing so, his consistent method was one-to-one dialogue, discussion about the crucial questions facing individuals and society as a whole and the role Buddhism could play in responding to these issues.