Makiguchi encountered Nichiren Buddhism through a fellow educator and school principal, Sokei Mitani (1878-1932). Mitani's principal writing on Nichiren Buddhism was an analysis of the Rissho ankoku ron (On Establishing the Correct Teaching for the Peace of the Land, a text submitted by Nichiren in 1260 remonstrating with the military-political leadership of Japan). While other Nichiren adherents in early 20th-century Japan took Nichiren's emphasis on national stability and security to mean a prioritization of the state and its interests, Mitani took a different approach, stressing rather that the land and the state are meaningful only as the place where people lead their lives. In the same thesis, Nichiren stresses that a change in the inner lives of political leaders and of the populace generally is the key to realizing a peaceful and prosperous society. 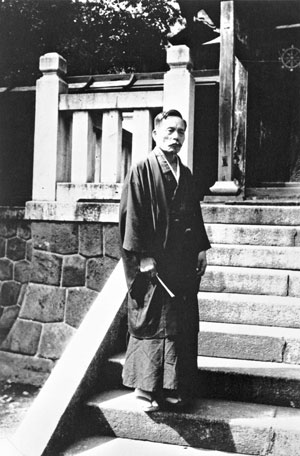 Makiguchi found Nichiren's vision for the reform of society deeply congruent with his own thinking. In formulating his theory of value, Makiguchi clearly rejected the idea that "the sacred" should be considered a separate and independent value. "Other than saving people and the world from suffering, what meaning could there be for the existence of religion in society? Isn't saving people from suffering the value of gain? Isn't removing misery from the world the moral value [of good]?" 1

Thus, for Makiguchi, Nichiren Buddhism comprised aspects that had been critical to his own thinking to date, including an emphasis on social engagement and on transforming society by changing the way individuals lead their lives. Where Makiguchi had seen, and for some time would continue to see, education as the primary vehicle for this transformation, over the next ten years he would increasingly come to view Buddhist practice itself as the most effective and universally accessible means for realizing a positive change in people's inner lives.

Continuing the passage cited above, Makiguchi next describes his own sense of the compatibility of the worldview of the Lotus Sutra with his own ideas, as well as his own experience of inner change through Buddhist practice.

But when I encountered the Lotus Sutra, I was astonished to discover that it in no way contradicted the scientific and philosophical principles which form the basis for our daily lives, and that it differed fundamentally from all religious and moral practices which I had studied to date. And just as I found myself moved by this discovery, I experienced a number of inexplicable phenomena in my daily life, which accorded precisely with the teachings of the Lotus Sutra. When I eventually made the firm determination to adopt this faith, I was able to affirm, in the actualities of daily life, the truth of the words of Nichiren Daishonin: "When the skies are clear, the ground is illuminated. Similarly, when one knows the Lotus Sutra, one understands the meaning of all worldly affairs." And with a joy that is beyond the power of words to express, I completely renewed the basis of the life I had led for almost 60 years. The sense of unease, of groping my way in the dark, was entirely dissipated; my lifelong tendency to withdraw into thought disappeared; my sense of purpose in life steadily expanded in scope and ambition, and I was freed from all fears; I became possessed with the irresistible and bold desire to effect the reform of national education with as much haste as was humanly possible. [1935]2