The Record of a"Thought Criminal"

A key focus of the interrogation to which Makiguchi was subjected was to determine his guilt in making statements that questioned or undermined belief in the cult of imperial divinity. As the initial report of his arrest carried in Tokko geppo stated:

A number of the ideas and beliefs of the group centered on the president Makiguchi are insubordinate and seditious in nature. Earlier surveillance work by police headquarters and the Fukuoka Special Police Division found that the president, Makiguchi, has been propagating seditious teachings among his followers and others, including teaching that "the Emperor is a common mortal" "The Emperor himself should not be telling people to be loyal to him. This should be struck from the Imperial Rescript on Education" "To slander the Lotus Sutra and Nichiren is to invite certain punishment" and "There is no need to pray to the Ise Jingu shrine." [1943]1

Over the course of the interrogation, Makiguchi expressed repeatedly the very ideas that branded him a "thought criminal." To assert, for example, that the law of cause and effect taught in Buddhism was universal and that the nation of Japan as well as its emperor were subject to this law was to commit an act of serious blasphemy. 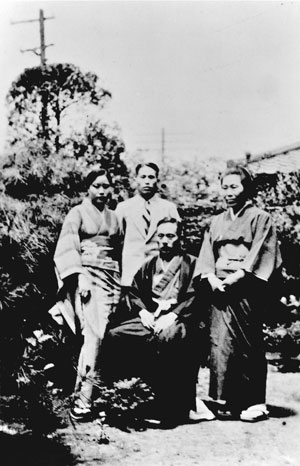 For Makiguchi, the choice was between two opposing and irreconcilable systems of thought. On the one hand, the Lotus Sutra asserts that all people possess the inherent potential for enlightenment and calls for a compassionate way of life--the way of the bodhisattva dedicated to awakening people to that potential. Makiguchi had been drawn to Nichiren Buddhism in part because its stress on the patient nurturing of human potential accorded with his own ideas and practice as an elementary school teacher. On the other hand, the official ideology of fascist militarism asserted that the lives of individuals had meaning only to the degree that they could be of service to the state. "To obliterate the self and serve the state" (messhi hoko) was one of the key slogans of the time. At a general meeting of the Soka Kyoiku Gakkai held in 1941, Makiguchi declared, "To void and empty the self is a lie. What is true is to seek genuine happiness both for oneself and for others."2

Likewise, Makiguchi clearly placed the Lotus Sutra, and its message of universal human dignity, above the person of the emperor. Explaining a passage from Nichiren's Rissho ankoku ron to his interrogators, Makiguchi states:

This means even if a monarch such as His Imperial Majesty were to believe in and practice the Lotus Sutra, if he should allow this Law to disappear from the land eventually various calamities such as civil war, revolution, famine and pestilence will occur and the nation will be destroyed.

In the light of past history we can see that Japan is now experiencing national disaster approximating this state of affairs. The current conflict in China and the war in the Pacific have also resulted from the Japanese nation's slander of the Buddha's Law. [1943]3

At the time, Japan's wars of overseas expansion and aggression were described as seisen, a holy war or sacred battle. Makiguchi describes them instead as a national disaster resulting from a mistaken belief system. He then expresses his hope that the emperor himself will come to embrace Buddhism to help realize a peaceful and happy society.

Q: If His Imperial Majesty were to embrace the mandala [of Nichiren's Lotus Sutra faith], would this not obstruct his freedom of will when it came to ruling the nation as his own heart advises?

A: Not at all. During discussion meetings of the Soka Kyoiku Gakkai and in individual conversations with members I have often spoken of the emperor being a common mortal, an ordinary human being who attended the Gakushuin as Crown Prince to learn what he needed to know in order to be emperor.

The emperor makes mistakes like anyone else. I have spoken of the first years of the Meiji period, in which Tesshu Yamaoka is said to have cautioned the Meiji emperor on a number of occasions and pointed out his mistakes. And I believe Yamaoka was entirely right to do this.

If the emperor did embrace the mandala of the eternal Buddha, however, I believe he would naturally develop his wisdom, allowing him to conduct his political affairs without error. [1943]4

Later in the interrogation record, Makiguchi repeats the same assertion.

Just as His Imperial Majesty must, in the event of illness, graciously accept the advice of doctors to recover his health, he must adopt a way of life that will ensure he does not become ill; he must obey the laws of cause and effect. If His Majesty should come to a clear understanding of this great and fundamental Law, the nation is certain to flourish and enjoy peace and stability. [1943]5