Having come to the point of considering the Buddhist Law expounded by Nichiren as a source of absolute Good, Makiguchi turned an increasingly critical eye toward the tenets of what would later be referred to as State Shinto--the amalgam of ancient myth and emperor worship generated in the late 19th century to provide the Japanese people with a unifying ideology. In short, it declared that the Japanese emperor was descended from an unbroken line reaching back to the sun goddess who was said to have given birth to the first emperor. Belief in this system was aggressively encouraged and any questioning of it violently suppressed. 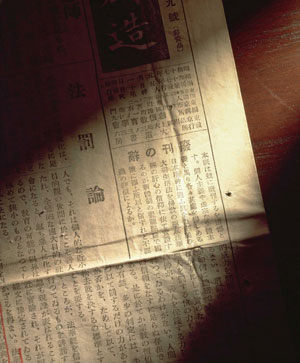 Final issue of the magazine Kachi sozo (Value Creation), May 1942

From the late 1920s, the police crushed Marxist and other leftist thought systems that criticized the emperor system from a materialist-economic perspective. In the first years of the 1930s, they harassed and suppressed liberals who saw the emperor playing a limited, constitutional role. Finally, from the mid-1930s on, they began crushing religious groups that could provide an alternative to the official doctrine of imperial divinity. Starting around 1941, Makiguchi was followed by the Special Higher Police--the thought police. Any time his talk turned to the subject of the practices of State Shinto, he was cut short by the police in attendance. This was a form of direct intimidation designed to silence critical thinking.

We must strictly avoid following ideologies of uncertain origin that cannot be substantiated by actual proof--even if they may be the most time-honored tradition--and thereby sacrificing the precious life of the entire community of self and others. In this sense, the question of [compulsory worship at] Shinto shrines must be re-examined as a matter of great urgency. [1941]1

Five months later, in May 1942, the publication was shut down by the authorities. Despite the increasing pressures that were being brought to bear on him, Makiguchi continued to travel throughout Japan to attend Soka Kyoiku Gakkai discussion meetings and spread the message of Nichiren Buddhism and the Lotus Sutra--a universal respect for the highest potential of all people. He continued to assert an idea central to Nichiren's thought, that to slander the Buddhist Law is to invite karmic retribution. The idea is not, however, one of a divine, externally imposed punishment. Rather, in the light of the strict causality that Buddhism sees underlying all phenomena, to slander or denigrate teachings asserting the ultimate worth and perfectibility of human life is to deny the highest possibilities of both oneself and others. And for Makiguchi, the present state of Japan, hurtling deeper into violent conflict first with its neighbors in Asia and now with the industrial superpower of the United States, was a manifest result of a profoundly mistaken worldview. As Makiguchi continued to speak out, a confrontation with the thought police, charged with enforcing ideological orthodoxy, became inevitable.