The Life of Great Good

As Makiguchi's own stance evolved, so did the nature of the Soka Kyoiku Gakkai, the society for value-creating education, which Makiguchi and Toda established simultaneously with the publication of the first volume of Makiguchi's Pedagogy in 1930. At first this was an association almost exclusively of educators committed to implementing Makiguchi's theories of value-creating education. By 1935, Makiguchi himself had come to see a different relationship between his pedagogical theories and Buddhism, and started to view the practice of Nichiren Buddhism as the most effective means to achieve the reforms he advocated.

Put simply, I consider it an unsurpassed honor to be able to state definitively that the essential core of the Lotus Sutra underlies and is the basis for the intellectual system of the pedagogy of value-creation. I have gained the level of confidence where I can say, not only to Japan but to the entire world, that unless it is based on this method and principle the genuine improvement of educational practice will be impossible. ... As I developed some faith and understanding in the Lotus Sutra, I was astonished to discover, quite unexpectedly, that it accorded with the progressive development within my own thinking of which I had not been consciously aware. As my faith and understanding continued to advance, I came to understand that whereas the essence of the Lotus Sutra is fundamental to the entire body of principles governing the processes of daily life, the rational educational methods proposed in my value-creating pedagogy are partial and peripheral. [1935]1

Makiguchi's understanding of value also evolved, and he came to see the Buddhist Dharma or Law as a source of absolute value, in that the practice of Buddhism made possible the creation of value under any conditions or circumstances. What he termed the Life of Great Good (Daizen seikatsu) was a life of absolute value creation rooted in the practice of Nichiren Buddhism. Starting from early 1942, the meetings of the Soka Kyoiku Gakkai were known as "Discussion Meetings for the Empirical Verification of the Life of Great Good." The model here was a kind of open-air laboratory of daily life in which the effects of Buddhist practice were tested, confirmed and verified against the experiences of others. 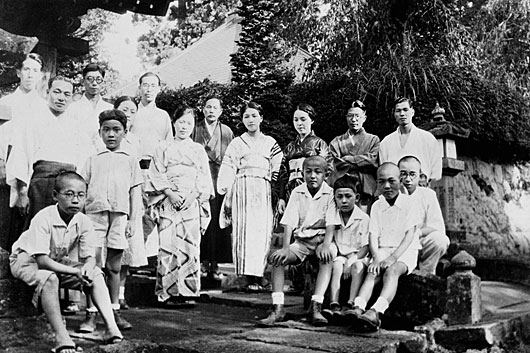 With participants at the third Soka Kyoiku Gakkai training course in Shizuoka, July 1938 (back row, 4th from left)

Although Makiguchi considered the understanding of Nichiren Buddhism transmitted within the Nichiren Shoshu sect to be correct and "orthodox," he did not consider that the sect's priesthood necessarily practiced those teachings fully or correctly. Makiguchi, for example, distinguished between "believers" and "practitioners," stressing the importance of an active practice that directly engages with and transforms reality. Likewise, Makiguchi's emphasis on active propagation did not always sit well with the priesthood. For much of the priesthood, lay believers were a constituency whose needs for funerary services (for centuries, sutra recitation was considered the exclusive province of Buddhist priests) were to be tended in return for a flow of donations sufficient to sustain livelihood. This ran deeply counter to Makiguchi's entire outlook and orientation. If the Buddhist Law were indeed as efficacious in enabling a life of happiness as he felt it to be, to fail to share this with others would be an act of intolerable selfishness. As he is repeatedly recorded saying in his later years: "There is no such thing as a self-centered Buddha."