On June 27, 1943, Makiguchi, Toda and six other directors of the Soka Kyoiku Gakkai were summoned to the head temple of the Nichiren Shoshu sect and pressured to accept the Shinto talisman that symbolically expressed acquiescence with the official state ideology. Makiguchi refused and on June 29, two Soka Kyoiku Gakkai directors were detained by the police. Makiguchi himself was detained on July 6, on charges of violating the Peace Preservation Law and blasphemy against Shinto and the emperor. On the same day, police raided Makiguchi's house in Tokyo, seizing documents and other personal possessions. Also on the same day, Toda was detained on the same charges in Tokyo, along with other leaders of the organization.

Following the detention of Makiguchi, Toda and other leaders of the Soka Kyoiku Gakkai, the classified monthly bulletin of the Special Higher Police, Tokko geppo, for July 1943 carried an article entitled "Soka Kyoiku Gakkai leaders arrested for violation of Peace Preservation Law." The August edition of Tokko geppo published the record of Makiguchi's interrogation, while the October edition detailed the charges brought against Makiguchi and the other leaders of the organization. It is highly significant that Makiguchi was charged with violation of the Peace Preservation Law; this was the principal legal tool used to suppress any form of thought that might counter or undermine the policies of military expansionism justified by the ideology of a divine emperor.

For approximately two months Makiguchi was subjected to intensive questioning at the police headquarters, following which he was transferred to Tokyo's Sugamo Detention Center on September 25. There his interrogation by the public prosecutor commenced in earnest, resulting in charges being filed on November 20 and a call by the prosecutor for a pretrial hearing. This "pretrial hearing" is not part of current procedures for criminal offenses, but was particularly important in wartime cases against "thought criminals." In such cases, the pretrial hearing served as a kind of rehearsal, in which prosecutors and judges could develop a clearly scripted narrative for any full trial. Most cases of charges brought under the Peace Preservation Law never actually went to trial. Open-ended detainment, brutal interrogation and the threat of long prison sentences were usually sufficient to produce a public recanting of dissident views. In fact, with the exception of Makiguchi and Toda, virtually all of the officers of the Soka Kyoiku Gakkai renounced the ideals of the organization under these pressures. 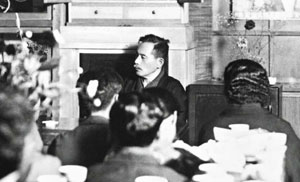 At a discussion meeting in Ikebukuro, Tokyo, 1942

Makiguchi refused to recant his beliefs and in fact continued to assert them, despite the risk of death, without the slightest hesitation. The interrogation record conveys the determination of a man who has seized the occasion to give final and definitive voice to his convictions. The fact that an excerpted version of the interrogation record was carried in Tokko geppo indicates the degree to which the authorities found his case unusual and worthy of study by those engaged in the suppression of dissident, antiwar thought in the final years of the war.

In response to a question about the means by which the Soka Kyoiku Gakkai gained new members, Makiguchi mentions two principal methods: through publications and through direct dialogue, listing his own writings and the organization's various publications as illustrative of the former, and discussion meetings as the main venue for the latter form of propagation.

He then goes on to clarify his relationship with Nichiren Shoshu:

I personally disliked the idea of formally becoming a priest. If I were to become ordained and have a temple, I would be confined in my actions to the teachings of Nichiren Shoshu. It would hardly be appropriate for me to promote my theory of value at a temple. I believe that my real purpose is fulfilled in remaining a lay believer and introducing my theory of value into the faith principles of Nichiren Shoshu. This is where the unique characteristics of the Soka Kyoiku Gakkai are to be found. [1943]1

Makiguchi also repeats his emphasis on the importance of universal laws and principles:

Although the Lotus Sutra was taught and revealed by Shakyamuni 3,000 years ago, the Buddhist Law in the Lotus Sutra is not something created by Shakyamuni. Without beginning or end, it is a law governing and giving vitality to the constant flow of all phenomena since time without beginning. What is called Buddhism are simply acts and practices that accord with this already existing law or principle. [1943]2