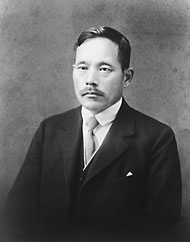 In 1928, when he converted to Nichiren Buddhism, Tsunesaburo Makiguchi was already 57. As a geographer and educator, he had demonstrated a deep commitment to the methods and worldview of scientific rationalism. At the same time, however, he never appears to have denied the importance of religion or the role it can play in people's lives. In an 1899 essay, "Mountains and Human Life," Makiguchi offers mountains as an example of the overwhelming power and majesty of nature that elicits feelings of reverence and awe, the very emotions that give rise to the religious sentiment in human beings.

Throughout his life, Makiguchi maintained this stance of seeing religion not as the product of a supernatural realm, but as something that must be rooted in, and meaningful to, the physical, psychological and social realities in which we live.

Writing in 1935, in a rare example of autobiographical exposition, Makiguchi describes his own religious background and the various faiths which he encountered and subjected to a respectful but scrupulous examination against the standard of scientific rationality.

As my research into The System of Value-Creating Pedagogy advanced and I was preparing to publish the first volume, I was moved by chance to research the Lotus Sutra, and my attitude to religion underwent a profound transformation. Although born into a family of adherents of the Zen sect of Buddhism and raised in one belonging to a Lotus Sutra school, I lacked any sentiment of faith. In the years of my youth, when I was struggling in the effort to study and learn, the teachers and friends whom I most loved and respected were for the most part Christians, but I never reached the point of actually taking faith. After coming to Tokyo as an adult, I found that Confucian virtues alone could not relieve feelings of intolerable anxiety and so I again did Zen meditation, listened to the teachings of Christianity, learned the methods of deep breathing and looked into other religious teachings. While I developed some feelings of faith for these, I never entered deeply into any of them. ... In none of them could I sense the power that could either overturn my scientific and philosophical orientation, or harmonize with it. [1935]1