As a Religious Reformer 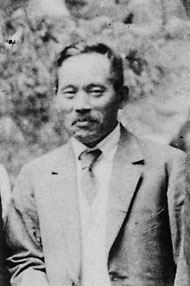 Makiguchi converted to the Buddhism of Nichiren in 1928. Nichiren Buddhism, grounded in the teachings of the Lotus Sutra and the laws of cause and effect, struck a deep resonance with Makiguchi's existing way of thinking; he found no contradictions between its tenets and the scientific and rational approach to which he was dedicated.

The organization Makiguchi founded, the Soka Kyoiku Gakkai, sought to promote his views on value-creating education, which Makiguchi saw as fundamentally compatible with the interpretation of Nichiren Buddhism passed down through the Nichiren Shoshu school with its head temple at Taiseki-ji. Originally made up of teachers and educators, the organization expanded over the course of the 1930s to embrace people from all walks of life, and its purpose evolved from the promotion of educational reform to promoting reform of society based on reform of religion. Its activities centered on small gatherings in members' homes, as well as periodical large-scale meetings in public venues.

As Japan's involvement in World War II escalated, the authorities sought to enforce universal adherence to state-sponsored Shinto, with worship of the emperor at its core. It was Makiguchi's resistance to this, even when prompted by the Nichiren Shoshu priesthood, that led to his imprisonment and ultimately his death in prison.

[The texts in this section were developed by Andrew Gebert, researcher at the Institute of Oriental Philosophy.]