Part 2 of The Geography of Human Life, on nature as the medium for mutual interactions between humans and the land, continues the work of analysis, looking first at inanimate elements such as the atmosphere and weather, then at life forms such as plants, animals and human beings. In Part 3, on the phenomena of humanity's life activities with Earth as their stage, Makiguchi examines the nature of human social organization, including the social division of labor, the location of various productive activities, the nature of national states, cities and villages. In the final chapters of Part 3, Makiguchi examines the nature of the state as well as the changing role of competition within and among human societies.

The question of competition was one of pressing importance to the world in which Makiguchi lived. The final decades of the 19th and first years of the 20th centuries were marked by a global competition among the major imperial powers seeking to expand colonial acquisitions. Darwinian notions of competition and survival of the fittest were enlisted to justify the domination and subjugation of supposedly weaker peoples by the stronger, more "fit" races of Europe. These ideas gained currency within Japan, also, and played a role in justifying its own program of imperial expansion within Asia. When The Geography of Human Life was published in 1903, Japan stood on the verge of war with Russia and many in Japan felt the nation was engaged in an unavoidable competition for survival. In fact, among many academics and intellectuals the prospect of war was greeted with outright enthusiasm. 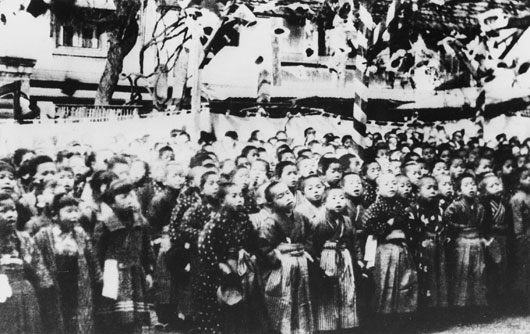 Against this backdrop, Makiguchi questioned the underlying logic of competition and explored the possibility that competition could be fundamentally recast in a nonviolent mode of mutual striving for excellence. He termed this "humanitarian competition" and suggested that as the historical possibilities of military, political and economic competition exhausted themselves, this form of competition would take a central place in human affairs. He saw this shift as not merely representing a change in the venue or form of competition, but a qualitative transformation, from a winner-takes-all style of competition, to one conducted within a consciously acknowledged framework of cooperation, what today might be called a "win-win" mode of competition.

There is no simple formula for this humanitarianism. Rather, all activities, whether of a political, military or economic nature, should be conducted in conformity with the principles of humanitarianism. What is important is to set aside egotistical motives, striving to protect and improve not only one's own life, but also the lives of others. One should do things for the sake of others, because by benefiting others, we benefit ourselves. This means to engage consciously in collective life. [1903]1

Following its initial publication in 1903, Makiguchi's The Geography of Human Life went through numerous editions, including a major revision with additional materials in 1909 and an unofficial Chinese-language edition. In total the book had 11 printings and exerted an important influence on the study of geography in Japan.