Home » Educator » As an Educational Reformer

As an Educational Reformer

Makiguchi served as principal of a series of elementary schools in Tokyo over a period of some 20 years. Throughout his career, he kept copious notes about educational theory and practice, and eventually he and his disciple Jogai (later Josei) Toda worked to systematize and publish these in the form of the four-volume work, The System of Value-Creating Pedagogy. 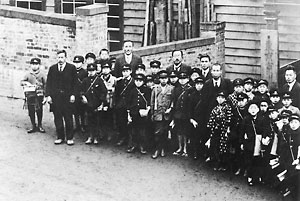 One of the consistent elements of Makiguchi's work as an educator was to move away from formulistic rote memorization and find ways to inspire in students a love of learning. "The aim of education," he wrote, "is not to transfer knowledge; it is to guide the learning process, to equip the learner with the methods of research."

During Makiguchi's youth, the educational system in Japan was geared to the production of loyal subjects trained to serve the interests of the state. As the years passed and Japan increasingly moved down the path of militaristic expansion, the education system became a means of instilling blind obedience to the militarist authorities, whose actions were presented as expressing the will of a supposedly divine emperor.

Makiguchi's educational philosophy, however, stood in stark contrast to these trends. To him, education was about the happiness of the children; it was a means by which children could open their minds and interact creatively with their environment, rather than serving as a tool to mold a docile and obedient population.

[The texts in this section were developed by Andrew Gebert, researcher at the Institute of Oriental Philosophy.]