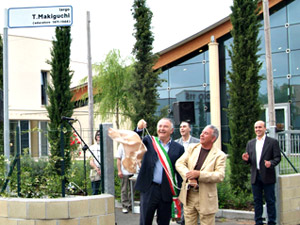 Cecina City in Tuscany Province, Italy, recently opened to traffic Makiguchi Plaza Street, named after first Soka Gakkai President and educator Tsunesaburo Makiguchi (1871-1944) in recognition of his lifetime commitment to advancing education. A dedication ceremony was held on May 23, 2009 at which a plaque bearing Makiguchi's name was unveiled. Cecina Mayor Paolo Pacini and Assembly Member Stefano Benedetti (elected mayor of Cecina in June 2009) attended, together with local students and SGI-Italy members. In 2001, Passignano sul Trasimeno in Perugia Province also opened a street paying tribute to the Japanese educator, while in 2006, Capraia e Limite in Florence Province dedicated a park in Makiguchi's honor.

[Adapted from an article in the June 6, 2009 issue of the Seikyo Shimbun, Soka Gakkai, Japan]