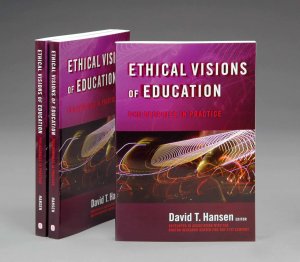 The Teachers College Press of Columbia University recently published Ethical Visions of Education: Philosophies in Practice,edited by Professor David Hansen of Columbia University Teachers College and developed by the Boston Research Center for the 21st Century (BRC) [the BRC was renamed the Ikeda Center for Peace, Learning, and Dialogue in 2009].

In a lecture held at BRC in February 2007, Dr. Hansen referred to the ten educators featured in Ethical Visions as "disparate thinkers," and explored the key philosophical differences between some of the best known figures in the book. Building on this theme of difference, Dr. Hansen clarified the concept of what he calls "cosmopolitan education," and proposed an approach to education that not only validates and accepts difference but, in a profound way, is shaped and energized by it.

In the book's foreword, BRC founder Daisaku Ikeda underscores the importance of pursuing happiness for oneself and others in contrast to merely being concerned with one's own well-being, if humanity is to find solutions to the myriad global issues such as armed conflicts and environmental degradation. Mr. Ikeda stresses that humanistic education, which focuses on unlocking the unlimited potential of the individual, will play a key role in this paradigm shift.

Several universities have already requested to use Ethical Visions as a textbook in their curriculum and many scholars have expressed favorable comments. Nel Noddings, professor of education emerita at Stanford University, remarked that she found the book appealing and that it is a great contribution to the philosophy of education and to the education of global citizens. Asserting that the book is a must-read by serious educators, President Larry Hickman of the Dewey Society said the book is morally empowering and confronts the standardization, commercialization and politicization that increasingly threaten schools today.

Adapted from an article in the April 11, 2007 issue of the Seikyo Shimbun, Soka Gakkai, Japan.