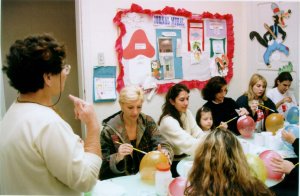 Teacher training is essential for the Makiguchi Project

270 elementary and junior high schools in Brazil are implementing the Makiguchi Project in Action, a program that puts into practice the philosophy of value-creating education as developed by Tsunesaburo Makiguchi. The idea for the project originated in 1994 among the members of SGI-Brazil who were inspired by Makiguchi's The System of Value-Creating Pedagogy. In the 1990s, fewer than half of schoolchildren in Brazil were able to complete compulsory education due to poverty, inadequate training of teachers and other reasons. 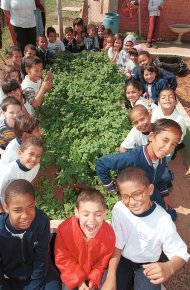 Students and vegetables they grew (Brazil)

The project was initiated at Cateano de Campos (a public elementary and junior high school) as part of the spring program in September 1994. The program offered creative and experiential learning methods such as workshops in arts and crafts and gardening, as well as other ways for children to enjoy themselves while learning. The program has been described as a process of liberation from the overemphasis on rote learning that has afflicted the Brazilian education system. Remarkable progress was seen just a few months after its implementation, and it didn't take long before other schools followed suit and implemented the project. Since then, it has been incorporated in 270 schools as of 2008 and is being practiced by one million students.

Rather than focusing on the competitive aspects of knowledge-based learning, the Makiguchi Project in Action is based on fostering a sense of value creation in the students by working together with teachers, parents and the community.
For example, through growing vegetables and farming, students learn the importance of nature; they will then experience joy through cooking the harvested vegetables for their families. Other activities include flower arranging, origami and acting. Students enjoy going to school and the teachers, too, have regained their confidence in education.

In Panama, meanwhile, Tsunesaburo Makiguchi's pedagogy based on value creation has been implemented in various schools. It began when Cristobalia de Sausedo, director and founder of John Dewey Children's Guidance Center, came across Makiguchi's theories after her retirement as a schoolteacher and initiated a project to spread his pedagogy in Panamanian society.

The project's aim is to foster creativity, a sense of contribution and social awareness from the early years of the child's development. The project is conducted in a workshop format which includes practical activities such as growing and harvesting crops, recycling, story writing and telling, toy-making and much more. Through these activities, children learn to cooperate and develop a heightened awareness of environment issues. 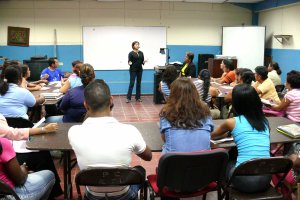 Children from the Children's Guidance Center

With support from the Ministry of Education, this project has been implemented in in Chiriquí Province, Chitre in Herrera Province, and in various regions in eastern, western and central Panama. Seminars are also conducted for the growth and development of the teachers themselves.


Adapted from a report from SGI-Brazil and SGI-Panama and articles in the Novermber 11, 2005 and March 28, 2007 issues of the Seikyo Shimbun, Soka Gakkai, Japan.