Buddhism for Global Peace, a student group at New York's Columbia University, in collaboration with the SGI-USA Educators Division, sponsored a symposium on "Humanistic Education: Theory into Practice--John Dewey and Tsunesaburo Makiguchi" on June 16, 2006. The event commemorated the tenth anniversary of SGI President Daisaku Ikeda's lecture at Teachers College, "Thoughts on Education for Global Citizenship." Some 120 Teachers College faculty and staff, as well as others in the field of education, attended. 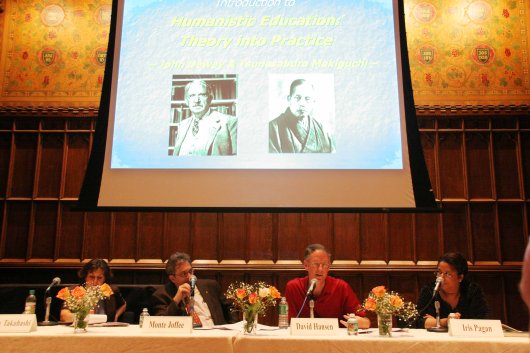 After opening remarks by the student representative, Yuya Uchida, Dr. Monte Joffee, the founding principal of the Renaissance Charter School in New York, spoke about the continuing relevance and significance of Mr. Ikeda's speech on education in contemporary society. This was followed by the keynote speaker, Dr. David Hansen--former president of the John Dewey Society and currently professor of Philosophy of Education at Columbia. Speaking on Dewey's educational theory, Dr. Hansen emphasized that knowledge comes alive when it is translated into action. He stated that Dewey, through application of his theory in the real classroom setting, became an example of scholarship for his students.

Adapted from an article in the June 29, 2006 issue of the Seikyo Shimbun, Soka Gakkai, Japan.