Dialogue on "Dewey and Soka Education" Carried in "Todai" Magazine 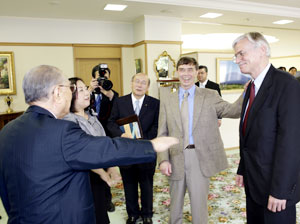 A serialized dialogue among Professors Jim Garrison and Larry Hickman, both previous presidents of the John Dewey Society, and Daisaku Ikeda began in the December 2009 issue of Todai, a Japanese educational monthly. In the first installment, the three examined the life of John Dewey and the legacy of his pedagogical philosophy, which had far-reaching influence on education in the USA as well as the democratization of education in post-war Japan. They also discussed the work of first Soka Gakkai president Tsunesaburo Makiguchi, whose progressive educational ideals emphasizing children's happiness over instilling blind, unquestioning patriotism called for by Japanese State Shinto led him to openly oppose the militarist regime in wartime Japan. Mr. Makiguchi was arrested, jailed and ultimately died in prison for his beliefs.

Professor Garrison teaches in the philosophy of education department at Virginia Tech in Blacksburg, Virginia, USA, while Professor Hickman is director of the Center for Dewey Studies and professor of philosophy at Southern Illinois University. Professor Hickman and Mr. Ikeda first met in Japan in 2001; Professor Garrison met Mr. Ikeda in 2008 to present him with the John Dewey Society's honorary lifetime membership.

[Adapted from an article in the November 1, 2009 issue of the Seikyo Shimbun, Soka Gakkai, Japan]