To commemorate the 80th anniversary of Tsunesaburo Makiguchi's Soka kyoikugaku taikei (The System of Value-Creating Pedagogy) published on November 18, 1930, several events were held throughout Japan from September through November 2010.

On October 24, 2010, the 33rd "All Japan Rally on Practical Applications of Humanistic Education" was held at Tohoku University's Centennial Hall in Sendai, Miyagi Prefecture, hosted by the Soka Gakkai Education Department. Over 1,200 educators and guests gathered from throughout Japan. 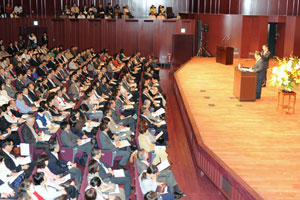 Four educators shared their classroom experiences, affirming that personal enthusiasm and passion for teaching were highly effective tools in building rapport with students and fostering their emotional and psychological development. In his speech, Vice President Yoshikichi Abe of Miyagi University of Education identified a common approach adopted by the four educators: a sustained effort to create innovative lessons and an active engagement in building relationships not only with students, but with their parents, guardians and the community. He added that he had high expectations that such applications of humanistic education--which is founded on an unwavering belief in the limitless potential of children and a commitment to inspiring humane, well-rounded values--would become accepted by a growing number of educators.

Guest speaker Dr. Hiroshi Aburakawa, professor of human sciences at Shokei Gakuin University in Miyagi Prefecture, not only reaffirmed the importance of primary education but also acknowledged the efficacy and merits of solutions based on the principles of humanistic education. It was equally vital that educators and schools develop programs for educational initiatives in coordination and cooperation with the community, he said.

On October 31, 2010, the Soka Gakkai Education Department organized and hosted a Soka education symposium in Yokohama, Kanagawa Prefecture, which focused on the practice of teachers keeping detailed journals of their interactions with students in the classroom including a review of specific teaching methods used, together with an examination of the general future of education. The featured keynote speaker was Utsunomiya University Faculty of Education Dean Hiroshi Watanabe, who said that Makiguchi pioneered classroom recordkeeping beginning with his own pupils. Professor Watanabe praised Soka Gakkai educators for carrying forward Makiguchi's legacy and vision over the years. The symposium included lively discussions between Watanabe and participating educators on the specific merits of applying humanistic education in the classroom.

On November 30, 2010, a 60-minute television special on Makiguchi's pedagogical theory and practices was aired in Japan by TV Hokkaido. The program, Kyoiku wa kodomo no tameni, sekai wa heiwa no tameni (tentative translation: "Education Exists for Children; the World, for Peace"), introduced Soka education as practiced at the Sapporo Soka Kindergarten, and included interviews with students enrolled at Soka University in Japan and Soka University of America.

In addition to the commemorative events and broadcast, publisher Daisanbunmei-sha recently released Makiguchi Tsunesaburo no shiso (tentative translation:" The Insights of Tsunesaburo Makiguchi") by Shoji Saito, an authority on Makiguchi studies who previously taught at Soka University in Japan. The work consists of three sections: the basic principles of value-creating pedagogy; the intellectual origins of Soka education; and research notes from articles and lecture records written by Makiguchi himself. It also includes 26 selections from Makiguchi's works and is considered "a grand compendium" of Saito's research to date.