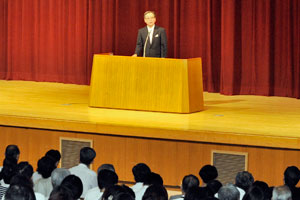 On June 1, 2014, the Soka Gakkai Education Division held a lecture at the Soka Schools in Kodaira, Tokyo, commemorating the birth anniversary of educator and first Soka Gakkai president Tsunesaburo Makiguchi. The event was sponsored by the Makiguchi Foundation for Education.

In his talk, Professor Watanabe asserted that from the modern age to the present, Japanese education has primarily served as a means to augment national prosperity. In contrast, he said, the ultimate aim of Soka Education is human development, an ideal that has been succeeded and carried forth by the three founding presidents of the Soka Gakkai.

Professor Watanabe also described the attributes of Soka Education, remarking that it aims to foster creative leaders who strive for harmonious coexistence and the flourishing of society; places priority on the happiness of every child; and trains educators to develop compassion and humility.

Lastly, Professor Watanabe spoke about the growing importance of Soka Education, which, he said, has been taking the lead in building a sustainable society and developing education that is firmly rooted in the community and in daily life.

[Adapted from an article in the June 2, 2014, issue of the Seikyo Shimbun, Soka Gakkai, Japan]