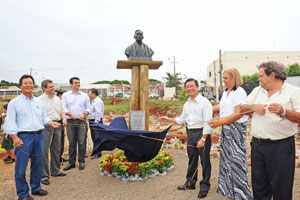 Unveiling a bust of Tsunesaburo Makiguchi at a new park dedicated in his name in Maringa, Brazil

On November 23, 2012, the Makiguchi Environmental Education Park opened in Maringa, Brazil. The city of Maringa dedicated the park to educator and Soka Gakkai founding president Tsunesaburo Makiguchi (1871-1944) in recognition of his lifetime commitment to education and to guiding humanity from war and misery toward a path of peace and happiness. Some 500 people attended the ceremony including local citizens and guests such as Maringa City Mayor Silvio Barros and House of Deputies member Luiz Nishimori.

The park, located within the boundaries of Maringa's natural preserve, features a bust of Makiguchi as well as three trees that were planted to commemorate the three founding presidents of Soka Gakkai. Toward the park's opening, members of SGI-Brazil, together with local citizens, took initiative in cleaning and maintaining the park.

[Adapted from an article in the December 3, 2012, issue of the Seikyo Shimbun, Soka Gakkai, Japan]