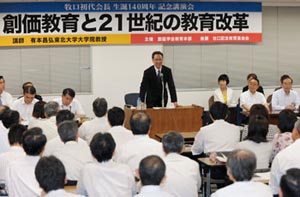 In his lecture, Prof. Arimoto discussed Makiguchi's idea of "Recognition and Evaluation" which avoids evaluating children without recognizing their capabilities. This idea resonates with modern educational "assessment" which emphasizes looking at their future possibilities rather than their past academic records, and requires cooperation between pupils and teachers.

Quoting Ikeda, Prof. Arimoto said that Soka Education is a source of light for society and is being actively passed on to future generations.

[Adapted from an article in the June 29, 2011, issue of the Seikyo Shimbun, Soka Gakkai, Japan]