Traditional Chinese Edition of "The System of Value-Creating Pedagogy, Volume 3" Published in Taiwan 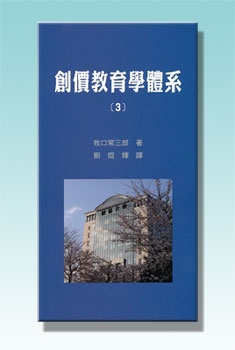 The System of Value-Creating Pedagogy, Volume 3 Published in traditional Chinese

TAIPEI, Taiwan: Publisher Cheng Yin Culture Enterprise has released a traditional Chinese edition of the third and final volume of Soka kyoikugaku taikei (The System of Value-Creating Pedagogy), Tsunesaburo Makiguchi's magnum opus, which was systematized by his disciple Josei Toda and originally published on November 18, 1930. In his progressive educational theory, Makiguchi describes education as being much more than a mere injection of knowledge, but a humanistic, value-creating process that nurtures wisdom and has the happiness of the student as its ultimate goal.

The work has been translated and published in more than 10 languages. Makiguchi's philosophy of value-creating education has been implemented in Japan, the United States, Brazil, India, South Korea, among others and ranges from kindergarten to graduate study.

[Adapted from an article in the June 28, 2011, issue of the Seikyo Shimbun, Soka Gakkai, Japan]